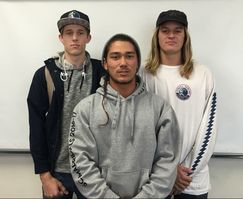 Club Founders
The Snow Canyon Men's Volleyball Club team was founded by members of the SCHS Class of 2017. Matt Morgan (Tennis) approached Mr. Martinez to be the club's faculty advisor/head coach. He enlisted Cade Thorkelson (Basketball & Tennis) & Max Kemp (soccer) as club presidents and all three served as team captains. Their vision was to provide an opportunity for the young men of Snow Canyon to compete in the sport of volleyball and establish a club team with longevity so they could one day look back at what they accomplished.

SCMVBC extended its membership to all young men from surrounding schools in St. George and even Cedar. Boys as young as 5th grade have participated in our spring training while we had our high school athletes compete in AAU tournaments up north in Salt Lake City & Provo.